Blessed be He Who sent down the criterion (of right and wrong, i.e. this Qur’an) to His slave (Muhammad ) that he may be a warner to the ‘Alamin (mankind and jinns). SURAH FURQAAN. (25:1) al- Quran

52 2nd Ave, in Houghton is home to our newly built Masjid Ul Furqaan.
7th July the community came together in a deeply moving monumental occasion to dust and clean and prepare our finally completed Masjid to perform the first Salaat, Salaatul Maghrib.

None present will ever forget the overwhelming feeling of brotherhood and worship present in every heart. Tears flowed and the sincerity of gratefulness manifest in every one present as well as families at home.

In the early 90s with the beginning of the end of the apartheid era a few Muslim families moved into the Houghton area. And as is the sunnah practice they established a Jamaat Khana.

The muslim community grew and with it the yearning for a fully fledged Masjid.

Alhamdulillah, consensus with senior Ulama was made, funds within the community was raised and in 1996 land on 52 second ave was purchased.
The Jamaat khana was moved to the new premises and a Madressah was established. In August 1996 the first Jummah was performed and the first Eid salaat was performed on the then tennis court on the property.

In 2009 demolition of the property started and a year later construction earnestly began. The Jamaat Khana moved temporarily to a home sponsored by one of the Mussallees and salaat continued from there.

Around July 2011, with the grace and mercy of Allah SA, with the duas and contributions of one and all, ‘Masjid-ul-Furqaan” was complete.

May Allah allow Masjid-ul-Furqaan to serve as a means of enlightenment in the
Muslim community and beyond, Ameen. 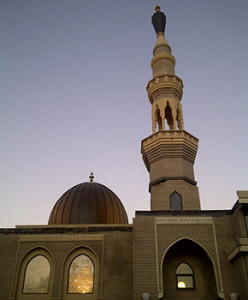 Rasulullah [Sallallahu Alayhi Wasallam] has mentioned: That a person who makes wudhu at home and then goes walking to the musjid to fulfil a Fardh Salaah, for every step that he takes towards the musjid, one sin will be forgiven, and he will be raised up one stage higher in Jannah.